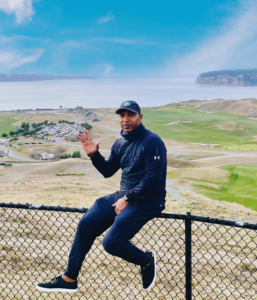 Not picking up a golf club until the age of 30, Durel Billy found himself going all in on the game, determined to get better. And then he discovered hickory golf, causing him to delve deeper into the history of the game, inspired by his discovery of John Shippen being the first U.S.-born professional and also an African American. In 2013, Durel founded the Atlantic Pacific National Golf Club, providing an outlet for friends, old and new, to play regular events together. Durel then revived the Washington State Hickory Open, held in 2014 at The Home Course. Now serving on the Board of Directors of Washington Golf, he is also on the Centennial Committee as the association prepares for its 100th year since its founding. Very active on social media under the handle Billy Bogey, Durel has become one of the conduits into the game for others.

Read the full transcript from Durel Billy’s Pod for the Course interview.